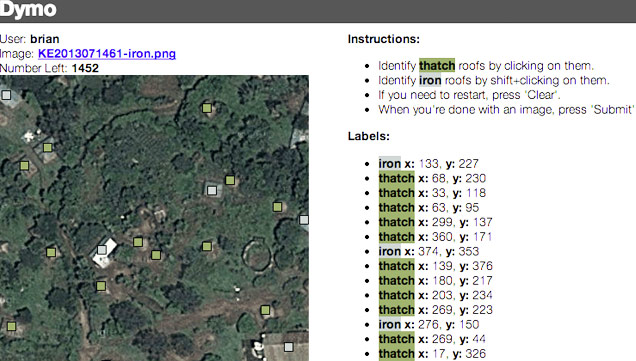 For the past few months, Brian Abelson and Kush Varshney, two of DataKind’s DataCorps Ambassadors, have been volunteering with GiveDirectly, a radical new organization that makes cash donations to poor households in Kenya and Uganda.

GiveDirectly wants to use data to target the neediest villages. These days, GiveDirectly staff go from village to village to collect that data themselves. But research shows a strong correlation a village's relative wealth, and the number of roofs in the village that are iron instead of thatch. Could data scientists help GiveDirectly to better identify villages in need, and spare the time of their volunteer corps?

Kush and Brian developed an algorithm to help identify those neediest villages based on satellite imagery of the villages within GiveDirectly's operating area, but with time running out they still had hundreds of images to classify before the algorithm could be trained.

Meetup volunteers to the rescue! In three days, ten volunteers classified more than 1300 images to make sure the algorithm would be ready to go in time for GiveDirectly's next big cash transfer.

Joy Sun, GiveDirectly’s Chief Operating Officer says: "We're excited that the algorithm could help us accurately target the poorest villages and strip more costs and time out of the process. We've shifted the work from manual data collection ... - machine learning is the next step forward."

ETA 1.29.14: This post was updated to correct several inaccuracies. GiveDirectly targets villages rather than households and has a team of paid staff who do data collection in the communities in which they operate.