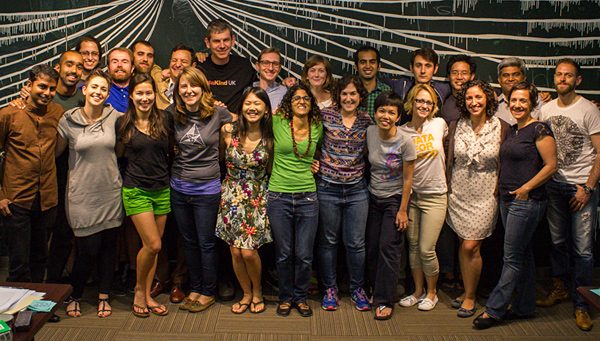 At the end of August, a group of DataKinders met up in New York to launch five new DataKind Chapters.

This wasn’t just an opportunity to experience the true hipster lifestyle™, it was a crucial meeting of minds to find out HOW to successfully make DataKind's model work in five new locations around the world.

For those of you who don’t know, DataKind is launching in San Francisco and Washington DC in the USA, and in Singapore, Bangalore, and Dublin in the rest of the world. And it’s that “rest of the world” that really interests me.

Here at DataKind UK we’ve been proud to be the only DataKind Chapter, so this widening of the family is both great (“Wow! We’re going to have new sisters/brothers!”) and a little worrying (“Will you still love me?”).  We’ve been really excited to try out the DataKind approach outside the US and we’ve found that whilst some things can be duplicated with little effort, there are others that become extremely local.

As keen students of international relations know, the UK is about as close to the US as anywhere is*. So there was always a pretty big question in my mind about how well DataKind’s approach would work elsewhere…

Obviously the only way that we’ll know if it works everywhere is to try it everywhere. And my first impression from the Summit was that there is huge enthusiasm for trying it!  The second thing I discovered was that the people who are the new Chapter Leaders are outstanding – bright, articulate, passionate and, if I may quote Hollister from Pretty Woman:  “not only handsome, but powerful... I could see the second you walked in here, you were someone to reckon with”.

So will it work elsewhere?  Well I don’t think the problem will be data – there’s tons of that. Nor will it be finding big and meaningful problems – they are everywhere.

If there’s going to be any problem it will probably be around language and culture. For example, in the UK, when we say fancy dress** we mean like a Halloween costume. Apparently in the US, it means getting dressed up.

Now you don’t have to wear fancy dress for either DataDives or DataCorps (you can if you want), but we quickly found out that other words are even more challenging.

For example, who do we work with? In the UK, we work with charities (or bodies acting for charitable purposes). In the US, the preferred term is nonprofit.  In other locations it may be something different (social organisations or non-government organisations for example). This may seem trivial, but it can easily lead to confusion and confusion can lead to errors.

So as we work together, we need to take extra care to make sure we communicate, both amongst ourselves, but more importantly to the rest of the world.  We need to be sensitive to other cultures and ways of working.  We need to listen to the people we work for and do so with humility.  Using data for good will change the world and we want you all to come with us on our journey!

** Don’t ask how we found this out, but suffice to say it rather bizarrely involves a bar, high heels, and a Pakistan Independence Day Parade…