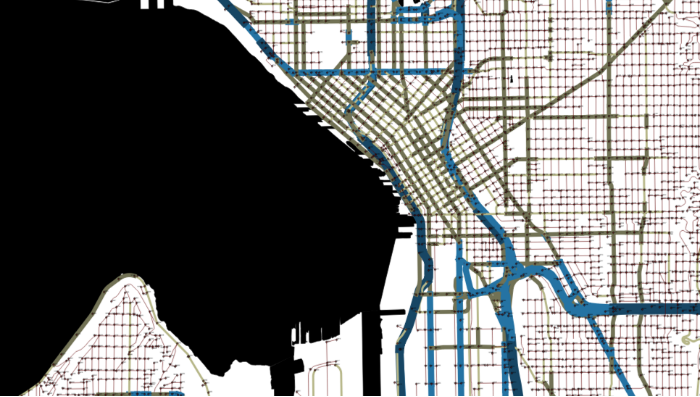 The Power of Data and Collaboration to Improve Traffic Safety
April 19, 2017

Visualization of estimated “exposure” or traffic volume by street in Seattle.

According to the National Safety Council, traffic collisions cause more than 40,000 deaths and injure thousands of people every year across the United States. These are not traffic accidents, but entirely preventable tragedies.

Since cities in Sweden started the Vision Zero movement in the 1990s, many U.S. cities are now joining the effort as part of the Vision Zero Network, pledging to reduce traffic fatalities and injuries to zero in their communities.

With limited budgets and resources, these local city officials face a daunting question: what will it take to reach zero? Given the sheer number of factors that contribute to traffic collisions and the many potential interventions that might address them, where should a city focus its efforts?

This is where a little bit of math, a few cross-sector friendships and a healthy dose of data can be a game changer. We recently completed our first Labs project, in partnership with Microsoft and its Tech & Civic Engagement Group, after over a year of work and close collaboration with the cities of New York, Seattle and New Orleans. This was the first and largest multi-city, data-driven collaboration of its kind to support Vision Zero efforts within the U.S.

Leveraging newly-available datasets including open data, internal city data and data from private companies, our Labs team - Erin Akred, Michael Dowd, Jackie Weiser and Sina Kashuk - as well as dozens of DataKind volunteers have built models to help cities identify where there is greater risk of traffic collisions, built tools to empower city officials to test what safety interventions will be most effective on what streets, and even helped cities estimate total vehicle traffic volumes citywide when the data didn’t exist. All these insights, tools and methodologies enable city officials to better allocate resources, select the best safety interventions and focus their efforts to keep all road users safe.

Delve into our case study for more detail.

How Collaboration Made It All Possible

While we think the world of our Labs team, we also know they depend on a world of collaborators to get a job like this done. Applying data science for good requires that we bring together not only relevant data sets, but also relevant decision makers, technical and issue area experts, funders and advocates that can inform and help co-design solutions that will have an impact.

We like to think of it as an ecosystem. Tackling the complicated question of reducing traffic fatalities in three different cities requires more than just data and data scientists. You need a strong project focus and strong project partners. You need funding to fuel your journey and subject matter experts to guide your path. DataKind is the convener that connects the dots, bringing all these usually far-flung resources and people together.

Not only was Microsoft the funder that made our first ever Labs project possible, we also turned to them as subject matter experts in civic tech and as thought partners in organizing such a long-term, wide-reaching initiative. For more, check out this blog from Elizabeth Grossman, Director of Civic Projects for Microsoft’s Technology and Civic Engagement group.

We couldn’t have asked for stronger project partners than the amazing folks we worked with in New York, Seattle and New Orleans. Taking on a project like this shows not only how committed they are to making streets safer, but how forward-thinking they are in their approach. They are pioneering some of the most cutting-edge techniques available and we hope to inspire other cities to do the same. Special thanks to the many hours and wisdom each city contributed - we are so proud to have worked with each of you.

And a special thanks to all those that have supported and contributed to this initiative including the Vision Zero Network and the University of Washington for hosting our Vision Zero DataDive.

For more on our work in each city, read our case study and sign up to receive updates on several related resources coming in the next few weeks: