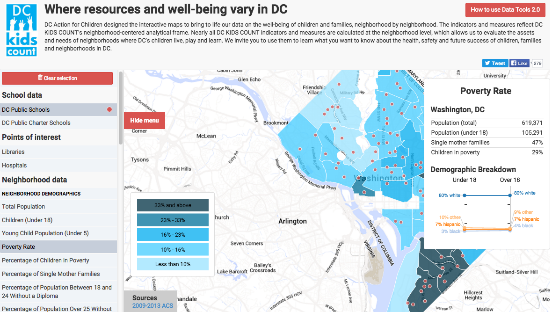 DC Action for Children is a nonprofit organization that uses data to support policies and actions that benefit the children and families of Washington DC. DC Action is also the DC grantee for Kids Count, a network of local-level organizations that track a variety of indicators of child and family well-being. Each Kids Count chapter distributes their data through the Kids Count Data Center, the network’s online database and a number of publications including a yearly data book that summarize the state of child well-being in each location.

When DC Action for Children became the new DC Kids Count host in 2012, our executive director HyeSook Chung wanted to rethink how we share the data we track with policy makers, service providers, and community members in DC. We know that the neighborhood a child grows up in - and the resources they have access to - plays a huge role in shaping their opportunities in life. However, this reality can be difficult to convey through the type of reports that nonprofits typically release. To effectively reach our audience and foster collective action on behalf of DC’s children and families, we needed to move beyond traditional, static PDF documents to visualize and communicate our data in new ways.

Beyond PDFs - Using Data for More than Reporting

In 2012, DC Action reached out to DataKind to discuss developing a data visualization project to replace our yearly PDF Data Book release. That March, DataKind organized DC Action’s first DataDive, bringing together a group of passionate and talented volunteers to partner with us to make this project a reality. Led by project leader Sisi Wei, our DataKind volunteers worked deep into the night on the prototype of our new data visualization tool. It took another six months to finish the work, but thanks to the creativity and dedication of our ‘data heroes’ we launched DataTools 1.0, our interactive, web-based data tool in October. The tool maps a variety of indicators of child well-being and community assets across DC’s 39 neighborhood clusters. The tool illustrates, in ways not possible with static data tables or graphs, how some DC neighborhoods have an abundance of assets that enrich the lives of children, while others are characterized by high levels of poverty and the many challenges that come with it.

Our partnership with DataKind did not end there. In 2014, we reached out to DataKind about creating an updated version of the tool. Again, our DataKind volunteers—some new to the project and some old friends—came together at a DataDive to begin work on DataTools 2.0, working to improve its interactive capabilities and expanding the range of data hosted on the tool to provide a clearer picture of how the resources are distributed across the city.

A Solution That Scales

The response to both the launch of DC KIDS COUNT 1.0 and DC KIDS COUNT 2.0 has been overwhelming, both locally and nationally. We’ve met extensively with local policy makers who have used the tool to better understand how to support children and families in the communities they represent. The work has also been recognized as innovative by numerous organizations, including the Annie E. Casey Foundation, Rockefeller Foundation (Innovators Award), Global Editors Network (2013 Data Journalism Awards), the IBM Insight Conference, The Classy Awards, SXSW Education and the United Nations.

Since the tool’s source code is available on GitHub, any organization can take the code and create their own interactive data visualizations. In fact, one of the most exciting aspects of the project has been the way that the tool has already begun to spread. For example, a Kentucky Kids Count grantee worked with the Civic Data Alliance to create their own tool using our source code. The tool even went global in 2014 when a charity working with DataKind's UK Chapter also replicated our tool to map child poverty in the north east of England. Read the full story here!

At DC Action, we are not shy about our love of data, so it is no surprise that our collaboration with DataKind was a natural fit.

Now that we are wrapping up the final work on DataTools 2.0, we have a chance to reflect on this incredible experience. The success of the tool is really a testament to the incredible work our DataKind volunteers contributed to this project. It has been such a privilege to partner with an organization like DataKind that brings people together to use their talents to tackle social problems, not as individuals, but as members of a community. It is the connections between the volunteers and organizations like ours that are formed over a common value of civic service and a desire to change the world that are truly inspiring.

We would like to express our immense gratitude to all the volunteers who worked to make this project the success that it is. So to all our friends at DataKind—Sisi Wei, Nick McClellan, Josh Tokle, Josh De La Rosa, Janet Montgomery, Chris Given, Max Richman and many more! We thank you!

One of the main goals for the project has been to create a tool that can benefit others beyond DC’s boundaries, so we are working on a handbook that explains how we created DataTools 2.0 so that more Kids Count chapters and nonprofits can replicate and adapt our the tool to fit their organizational mission.

While we have not started working on version 3.0 of the tool, this hasn’t stopped us from doing some preliminary brainstorming- so stay tuned.

If you're local, join DataKind DC to give back or learn how your organization can get started on its data science journey. If you're interested in repurposing the code for DataTools 2.0 - get busy on GitHub!