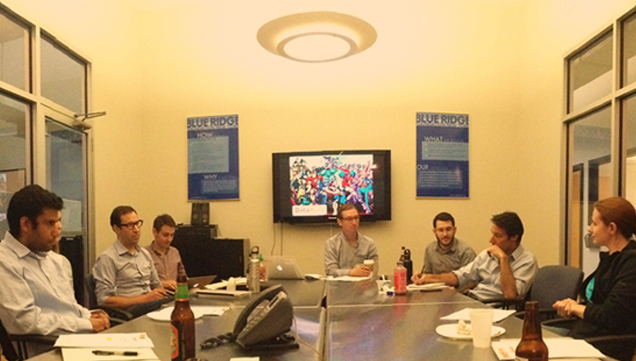 Our newest team of DataCorps Ambassadors met up last week to kick off the next round of DataCorps projects. For the next six months, they'll be working with four great nonprofits to help them use their data to make a world of difference.

Let's give a round of applause to the DataCorps Ambassadors of Fall 2013:

Brian Abelson proudly professes his love for R and the movie Hackers, saying, "My wireless network is named 'The Gibson.'"  He tweets from @brianabelson.

Will High thinks Monte Carlo methods are beautiful. His favorite movie was The Big Lebowski until The Dark Knight came along.

You can find Cat Miller at @redcat9. Her language of choice is SQL and her movie preference is for Lion in Winter (the good one with Katharine Hepburn.)

Kush Varshney tweets from @krvarshney and his favorite tool is Matlab.

Alex Vaughn loves Stata and R. She tweets from @datagrl and her favorite movie is The Sound of Music.

Seth Feaster describes himself as positively evangelical about cartograms. His favorite film is Bladerunner, but My Neighbor Totoro and Lawrence of Arabia aren't far behind.

Christopher Tynan, aka @tynanch, favors ipython, thought he admits to an unhealthy dose of Excel once in a while. His favorite movie is either Lost in Translation or Fargo.

Sonia Mehta is starting out with SQL but eager to learn more. Her favorite film is The Shawshank Redemption and you can find her at @smehta930.

Last but not least Sonali Murarka wraps up our team.

They're partnering up with Give Directly, Medic Mobile, The Mission Continues, and Thorn to undertake some major data projects over the next few months. Stay tuned to see what they accomplish!

The DataCorps Ambassadors will be recruiting soon to build their teams. Sign up if you'd like to volunteer.