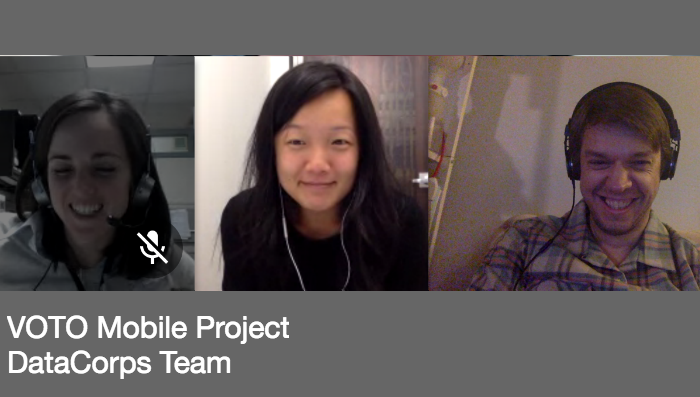 Giving Voice to the Voiceless Through Mobile Engagement
April 18, 2016

As part of National Volunteer Week this month, we are profiling our DataCorps volunteers of projects past, present and future. These volunteers donate a whopping 5-10 hours a week over the course of several months to apply data science techniques that can help advance a social change organization's mission.

"We couldn't be more enthusiastic to be working with Carl, Katherine and Susan on this important question. Mobile engagement has the potential to dramatically contribute to the sustainable development goals, but only if it doesn't leave out critical segments of the populations traditionally excluded from mobile engagement, namely rural women. Their dedication to our vision, their attention to detail, their professionalism, their passion and their pursuit of excellence has been appreciated since the very start of our project. We are very excited about the outcome of this research, and so is the M4D community. I couldn't be more thankful for their help and I really hope I have the resources to bring them on the VOTO team one day! Thank you, thank you, thank you!"

As we often say, we’re living in the midst of a data revolution. Data is pouring off cell phones, laptops, satellites, and sensors and has great potential to help us better understand our world and more effectively address some of the tough social issues that plague it. While this new wealth of data gives us more information than before, it does not necessarily paint the full picture. Many populations that don’t have the same access to internet or the same technologies are often missing from the datasets. This issue of data deserts is a big challenge for those working to serve these same underrepresented populations and has been a key topic of discussion surrounding the UN Sustainable Development Goals.

VOTO Mobile is one of West Africa’s fastest growing social enterprises, amplifying the voice of the underheard through a mobile-based Interactive Voice Response (IVR) and survey platform that removes the barriers to insightful mobile communication between citizens worldwide and the organizations that serve them. VOTO Mobile would like to help their partners engage the hardest to reach and most marginalized populations in the world. For example, they explicitly aim to help organizations reach rural women, who are often underrepresented and left out of most development projects. They test the best ways to engage women through mobile phones to build a robust evidence base that answers questions such as: would having a female voice present the survey instead of a male voice help ensure completion by women? What times are best to contact women to complete a survey given their daily household responsibilities and limited mobile access?

Understanding the impact of these factors, and others, on female response rates helps VOTO serve their partners and raise the voices of women around the world. In a project sponsored by Google, DataCorps volunteers will perform statistical analysis on VOTO Mobile’s call and response data to identify the factors that result in successful completion of IVR surveys by  women in different contexts (countries, survey types, etc). In addition to a set of recommendations, volunteers will develop a tool to enable VOTO Mobile forecast response rates and  design surveys that truly reach the hardest to reach and most underheard populations in the world.

What inspires this team to give back?

"I aim to leverage newly available technologies and data sources to address old and persistent problems, such as homelessness among the mentally ill."

Carl Smith
Carl is a scientist and a developer. He works at Moat, an ad analytics company. Carl enjoys making analysis of large datasets tractable, and he enjoys the subsequent analysis even more. Meet Carl >

"I like doing useful things with data! It's fun to address a real-world need."

Katherine Hoffmann
Katherine is a PhD student in Information Systems at NYU Stern. Previously, she worked on randomized field experiments in the development sector, with a focus on water chlorination and U.S. household finance. Meet Katherine >

"I like working with fellow data scientists who believe in using their powers for good. It gives me the warm fuzzies."

We believe data has the power to change the world for the better, but only when it’s inclusive and reflects the diversity of all voices. We’re honored to be working with VOTO Mobile on combating the issue of data deserts and helping more underrepresented voices be heard.