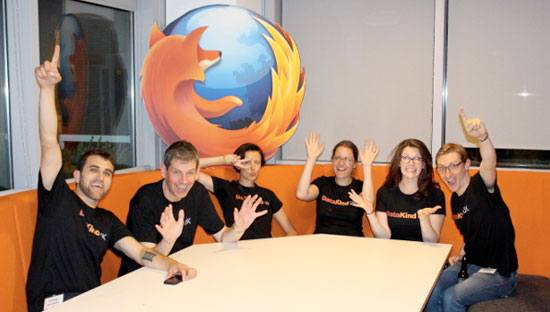 The following is a guest post by Kaitlin Thaney, director at DataKindUK, as well as head of the Mozilla Science Lab and co-chair of the Strata Conference in London. You can follow her at @kaythaney.

Last year was a year of firsts - we held the first Strata Conference in London, as well as the first DataKind DataDive outside of the US. Both were experimental in their own way - testing the waters and community in the UK when it came to "data science." I'm fortunate to sit on both sides, as the co-chair for Strata in London, as well as a director of DataKindUK - the org's first global chapter.

Conversations about starting a UK branch of DataKind really started at that first DataDive. Despite being told that there wasn't as strong a data community in the UK as in the US, over 70 data scientists came out to spend that weekend before our inaugural Strata helping charities maximize their impact. It was apparent that there was an appetite in the community for more discussion about how to use skills traditionally associated with "data science" for social good. And to add to that, over 700 participants filled the Hilton Metropole for two days of discussion about working with data and the issues that come with that, including ethics and privacy.

Now, a year later, as we kick off the second year of Strata in London, we have an up and running (and registered!) UK charity known formally as DataKindUK (more on the launch here in the Guardian). We have a board consisting of some of the UK's greatest when it comes data science, each a part of that first event last year. And more importantly, we've catalyzed a conversation and empowered a community around the idea of using data for good, through our Meetups and DataDives, as well as through the Strata community.

Together, we’re working to grow a data-driven social sector in the UK, promoting ethical applications of data science, and connecting data scientists with opportunities to use their skills to serve the social good. Engaging with the community and starting a dialogue around data philanthropy is a key part of that, and we’re thilled to be back at Strata this year.

Heading to the conference this week? The DataKindUK team will be out in full force. Here are a few places you can catch us …

* Catch Fran on Monday on the mainstage speaking about working with public health data. // Monday 10:10 GMT

* Fran and Duncan will be leading a session on "using data for EVIL" as part of the ethics track. // Tuesday 13:15 GMT

Other sessions worth keeping an eye out for:

* Does your organization rely on spreadsheets? Don't miss Felienne Hermanns' keynote on our fundamental misunderstanding of them. // Monday 9:40

* Yodit Stanton from Atomic Labs (and one of our esteemed Data Ambassadors) will be speaking on Monday about changing the nature of healthcare using sensors and data science. // Monday 15:35

* Hear more about how data could help us fix the economy in this session by NESTA's Stian Westlake and Louise Marston // Monday 16:25

* James Stewart and James Abley from the Government Digital Service will be talking about their work with the UK government. // Tuesday 16:25

You can catch the keynotes on the Strata livestream or follow the conversation on Twitter #strataconf. Looking to learn more about DataKind UK? Catch Fran (@fhr), Duncan (@duncan3ross), Stewart (@stewarttownsend) or myself (@kaythaney) at the event or online. You can also join our meetup group to hear more about upcoming events and to join the community.