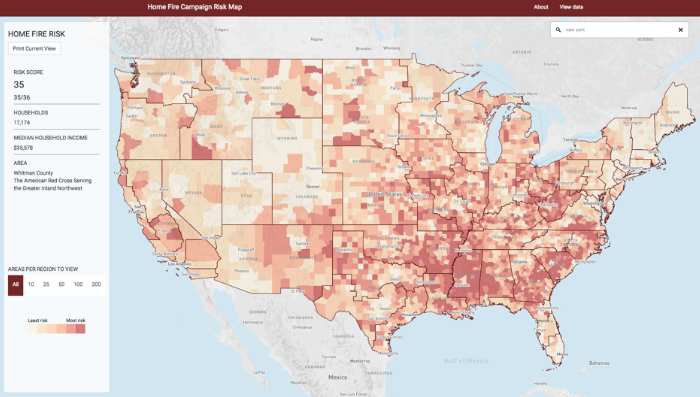 After over a year of work and collaboration between DataKind DC volunteers and our partners at the American Red Cross, we’re excited to announce that today we have officially launched the Home Fire Risk Map. Starting this week, this resource will be utilized by Red Cross volunteers and partner organizations across the United States to target high-risk homes for smoke alarm installations and fire safety education.

Every year, 25,000 Americans are killed or injured as a result of home fires. The American Red Cross Home Fire Campaign aims to reduce these deaths and injuries by 25% over a five-year period by installing smoke alarms in at least 1 million homes across the United States and its territories. Data suggests that as many as 60 percent of fire deaths can be prevented simply by having a working smoke alarm and by knowing what to do in the event of a fire.

Using open data from the American Community Survey and the American Housing Survey, aggregated and collected by the Enigma smoke-signals project, data from the National Fire Incident Reporting System, and Red Cross home fire preparedness and response data, over 50 DataKind DC volunteers and eight American Red Cross staff and volunteers worked together to build this tool in order to help identify high-risk areas in cities and towns across the United States. To date, over 400,000 alarms have already been installed in over 175,000 households. This tool will ensure that the remainder of the organization’s pledged 2.5M smoke alarms are installed in the communities where they are needed the most.

The DataKind DC team began work at a weekend DataDive in May 2015. In less than 24 hours, our volunteers assembled the start of what would turn into a year-long project in collaboration with American Red Cross. After the DataDive, we organized into two teams - a modeling team and a mapping team to continue building the tool through a series of work nights over the span of several months.

First, our volunteers built a model that predicts which communities have the least amount of smoke alarm coverage. Then we went a step further by assessing home fire prevalence to see where fires are most likely to occur in the future. Since we especially want to protect inhabitants, we built a third model that predicts the likelihood of an injury or death when a home fire does occur. All of these models are encapsulated within the Home Fire Risk Map released today.

Over 2.5M Americans will benefit from free smoke alarms and fire safety education over the course of this campaign, and since the American Red Cross is prioritizing the use of 10-year, tamper proof smoke alarms, the compounding benefit in these high-risk communities will last for many years to come.

I want to give a huge thanks to everyone that joined me in volunteering their time to make this happen including:

We also could not have done our work without the expertise and dedication of our partners at the American Red Cross - special thanks goes to Jonathan Loewus-Deitch, Jake Janecek and Jean Weicher for being such fantastic collaborators.

Our project is open source on GitHub under the MIT license - feel free to fork the modeling repo and mapping repo if you’re interested and keep us posted on what you create.