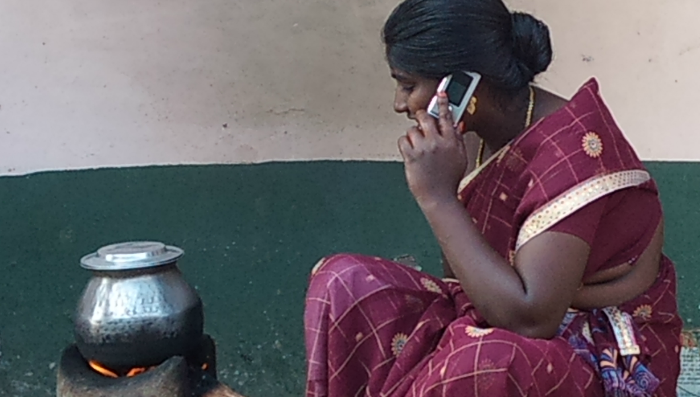 VOTO Mobile is one of West Africa’s fastest growing social enterprises, amplifying the voice of the underheard using interactive mobile surveys in local languages. Their mobile phone notification and survey platform removes the barriers to insightful mobile communication between citizens worldwide and the organizations that serve them. VOTO aims to survey remote populations on behalf of its partners—large international organizations and NGOs—to reach groups typically underrepresented in the data, which  is then used to inform humanitarian outreach efforts. Barriers such as low literacy and lack of smartphones or internet, make these populations harder to reach and they therefore often have less data collected about them. This lack of information is what’s known as a “data desert” and it has huge ramifications for public policy decisions and the appropriate allocation of humanitarian resources.

VOTO Mobile exists to combat this issue, though it too struggles to reach rural women in its mobile surveys. They wondered, could their past survey responses from 11 countries and 14 surveys shed light on what might be affecting response rates from rural women so they can capture more from this group in the future to better inform humanitarian efforts?

In a DataCorps project sponsored by Google, volunteers Carl Smith, Susan Sun and Katherine Hoffmann dove into VOTO’s data, which included things like survey time, length and language as well as information on respondents like age, location and more. The first task was to narrow down all these variables to things that VOTO actually has control over, but unfortunately there was limited variation in some of the key variables the team wanted to explore, making them less useful than initially thought.

The team decided to take a step back to see what else they could do to help VOTO. They provided VOTO with  recommendations on how to enhance their data collection and database structure, then built an interactive data plotting tool to enable the organization  to do its own data exploration once the new data was collected.

On the analysis side, the team built heatmaps as an easy way to explore correlations between existing variables of interest including the language of the survey, time of day and day of the week of the calls and rural female populations. Lastly, they built an easily scalable and interpretable classification regression model to break down the influence of the most significant variables. For example, they found that the country of the respondent had a significant impact on response rates. However, because there is not enough cultural and circumstantial data collected about the respondent, it’s difficult to determine precisely why this is the case. More data and analysis is needed to tease out what specifically about a respondent’s local context is impacting response rates, but this provided a helpful flag for VOTO to guide its learning.

VOTO Mobile is now reviewing the team’s recommendations and using some of the initial insights on the factors influencing response rates to inform its work. They are in the process of standardizing  the way they ask basic questions such as gender, age, and income so it becomes uniform across surveys and therefore easier to compare. They are also using a female voice to deliver surveys as much as possible. Once they have collected more data, there will be even more potential for analysis to inform how VOTO can reach more rural women in its surveys going forward.

The issue of data deserts continues to be a challenge for those working to serve underrepresented populations and has been a key topic of discussion surrounding the UN Sustainable Development Goals. In this age of so-called Big Data, it’s important to note that there is still work to be done to ensure policy makers are using data representative of the communities they are trying to serve when designing humanitarian interventions.