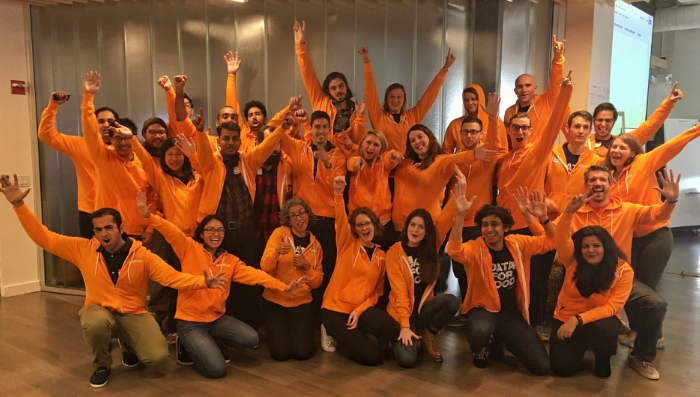 This year will be DataKind’s seventh year (!) harnessing the power of data and AI in the service of humanity.  What started as a hastily scrawled appeal to local NYC data scientists to run a more socially-minded hackathon exploded into an international movement of over 18,000 data experts, nonprofits, and social change makers teaming up across the world to create more than 250 data science projects for social good. Humble geniuses across our five chapters and around the world have generously donated more than $28 million worth of their precious time and energy to build worldchanging solutions that distribute water more effectively, track illegal mining from satellite imagery, and save thousands from preventable fire deaths. All along the way, we’ve seen nonprofits change their cultures around data, governments incorporate data-driven decisionmaking into their policies, and funders rise up to support a more data-enabled social sector.

As we enter a new year, I found myself reflecting on how things have or haven’t changed since this wild adventure started in 2011, and wanted to share three quick observations:

The need for AI for social impact has only grown.

We started DataKind (then “Data Without Borders”) because of a desire to see data science and AI applied to reducing human suffering, not just getting people to click ads. I’ve been so heartened to see the swell of people who felt the same, watching corporations and governments alike join the “Data for Good” movement and doing great work. However, the pace of technology is breakneck, and the problems facing our world - hunger, climate change, systemic inequity - are only mounting. Without a countervailing force of people working to build AI for social impact, we may find ourselves at the mercy of a few powerful entities defining how data is used for the world. AI will be shaped by who wields it. Rather than merely thinking about how to get the social sector to “catch up” to Silicon Valley, we should aim to forge a whole new vision of socially responsible technology, built by the very people who have tirelessly fought for a more just and prosperous world.

Big data, ML, AI:  The buzzwords have changed, but the punchline’s the same.

We very nearly named DataKind “AI Without Borders” when we started. We quickly got the feedback that everyone thought that meant we were peddling robots and no one would work with us, so we focused on the more welcoming term “data science,” helping folks understand, automate, and predict from data. Just a little while ago, I heard we were not considered for a project because “DataKind does data, but we need AI.” :) The buzz battle is fierce, and we’ve seen everything over the last seven years from the ubiquitous but opaque “big data,” to the marketing slush of “cognitive computing,” to the inscrutable “deep machine learning” (?). Whatever word pops into the zeitgeist, we see a common thread between all of these: humans and computers are able to make more sophisticated decisions with data as we digitize our world. No matter what you call that trend, it’s going to continue to grow, and the world is going to need people shaping it toward the better angels of our nature.

In the book “New Power: How Power Works in our Hyperconnected World”, friend of DataKind Henry Timms writes, “... our ubiquitous connectivity makes possible a different kind of power. ‘New power’ is made by many. It is open, participatory, and peer-driven.” At DataKind, we couldn’t agree more. We know that in order to solve wicked problems, we need corporations, foundations, citizens, universities, and governments stepping into the fray to work together. Our strongest wins as DataKind have come from that collaborative energy and it is our model that is centered not on data science but on building bridges between disparate groups that has really enabled it. As we continue to build DataKind into a distributed organization, we hope to build such a pervasive and connected set of people that DataKind itself almost seems to disappear, existing invisibly as the ethical AI principles that are seamlessly embedded into the very structures of our world.

The world has changed a lot in this last half decade, but the challenges and the opportunities are still the same. So what does next year hold for us?  First off, we’re going to double down on our networked model, continuing to enable the fantastic work being done by pro bono data scientists across the world. We’ve tried many models of bringing data science to the social sector and will continue to experiment, but what is clear to us is that our global network of volunteers are the true heroes. Tangibly that means we’ll be looking to expand the number of folks in our network and connect them even more intentionally. We’ll be organizing our network to go deep into issue areas to make sustained progress. Instead of 100 separate projects in maternal health, we want our DataCorps to be a veritable “AI PeaceCorps” that moves the needle on humanity’s biggest challenges. If you’d like to step up to donate your time with us there, sign up with us and keep an eye out for more!

Beyond the great project work we have in store tactically for the network, it’s really the people, our vast community of big-hearted dataists who have joined together to build a better world with data and AI, that excites me most. I’m incredibly inspired by all of the folks who, since Day 1, have stepped up to give their time to build this movement. DataKinders live up to their name - they are kind without being naive, smart without being arrogant. No matter what nationality, age, gender, religion, or background, they have a healthy skepticism of technology coupled with a fervent belief it can do wonderful things for humanity. Whether you are a technologist, nonprofit, foundation officer, donor, or just a fan, we couldn’t do our work without you and are so grateful for all that you do.

To everyone out there on this quest to shape data and AI for the greater good, to everyone just curious and dipping their toe in, and to all those out there who don’t consider yourselves “technologists,” but are simply citizens of the world who believe a better future is possible, we are honored to be among  you. Thank you for being a part of this movement, whether you’ve been here from the start or just the end of this sentence. Here’s to many more great years to come!