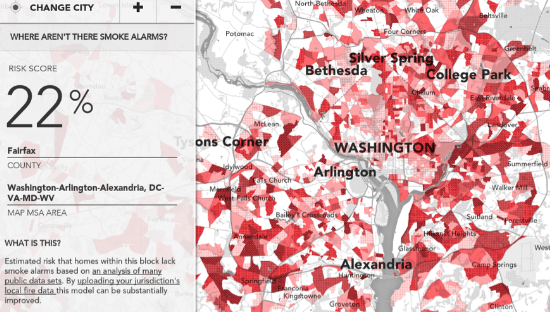 In another example of the impact of DataDives, DataKind volunteers have collaborated with Enigma to help prevent house fires.

Every year 25,000 Americans are killed or injured in fires.  As many as 60% of these deaths and injuries can be prevented by simply installing smoke alarms.  Local fire departments and the American Red Cross are working hard to make sure homes are protected with proper smoke alarms, but they often have troubles identifying the homes in need of alarms.  This was exactly the problem the City of New Orleans was looking to solve.

Enigma is a company which “maintains the world's largest collection of public data.”  Enigma collects public data and builds products to help organizations make data-driven decisions. In 2014, Enigma was approached by the New Orleans Fire Department and the City's Office of Performance Accountability for help in determining which homes are at the highest risk for not having a smoke alarm.

Enigma was able to build a project that could help New Orleans outreach coordinators determine what house doors to knock on first.  After encouraging results and the discovery of nationwide data, Enigma decided to generalize the project for over 170 cities.  The project was open-sourced and shared on GitHub.

DataDive With a Similar Problem

Fast-forward to May 2015, where a DataDive occurred in Washington D.C.. The Red Cross was hoping DataKind volunteers could help them predict where to target for future fire-safety preparedness events.  The DataKind volunteers wasted no time and got right to work.  They instantly started collecting and merging data from various sources: American Community Survey, National Fire Incident Reporting System, and Red Cross home fire preparedness data.

While the DataDive was occurring, the DataKind volunteers discovered the previous project from Enigma.  They quickly repurposed the code to fit the needs of the Red Cross situation.  In less than 24 hours, the DataKind volunteer team had created a map with county-level recommendations of where the American Red Cross could target new smoke alarm campaigns.

Joining Forces For The Future

After the DataDive, Enigma became aware of the Red Cross project.  The two teams are collaborating to use and improve upon the Enigma model while incorporating additional data sources from the Red Cross.  That project currently exists as Smoke Signals, and it predicts the fire risk block by block for over 170 cities across the United States.

According to Marc DaCosta of Enigma, “We see Smoke Signals as a first step to helping the public sector leverage open data to improve the lives of citizens.”

Enigma is excited to be doing good with data, and they have already been contacted by many local fire departments.  DataKind is pleased to see the efforts of its volunteers expanded and put to good use.

Jake Porway, DataKind founder & executive director says, “It’s wonderful to see yet another example of how strong relationships, open data and open code are helping data solutions spread. Using data science for good is about more than bringing together the right data. It’s about bringing together the right people. We should always strive to collaborate with others and share learnings - the world benefits when we do.”

The project is currently welcoming other contributors.  If this sounds interesting to you, please fork the code repository on GitHub and get involved.