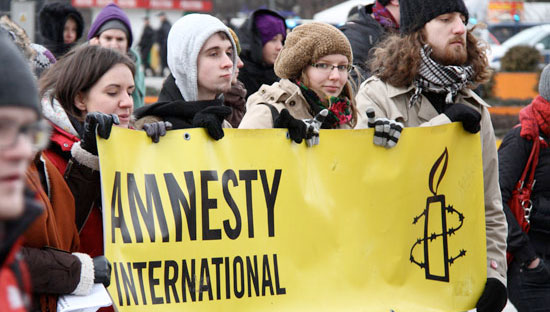 In just one year, Amnesty International recorded and investigated human rights abuses including displacement, torture and executions in 159 countries and territories. Fighting back demands a powerful response system, and that’s where the organization’s Urgent Action Network comes in, a global version of 9-1-1 for human rights violations. The alert system mobilizes the group’s three million supporters to rapidly respond to human rights threats unfolding across the globe and invites them to contact authorities that can address the situation.

There is a constant stream of Urgent Action Alerts coming in by email and other means and, after 25 years, the program has accumulated a massive amount of data - 5,000 Urgent Action cases from more than 50 countries. With so many grave cases that can quickly escalate to life-and-death situations, Amnesty International faces tough decisions about how to recognize the pressing and sensitive nature of its data. The organization turned to its trove of data to find answers: Could analysis of its past Urgent Actions predict the future Urgent Actions most likely to escalate to broader human rights violations? How could Amnesty International use data from its past to best prioritize rapid response, identify high-risk situations and anticipate hot spots? More broadly, is there a way to prevent future catastrophes and save lives by recognizing patterns of violations in different regions?

In November 2013, a team of over 20 DataKind volunteers, lead by Data Ambassadors, Adam Laiacano and Victor Hu, partnered with Amnesty International representative Samir Goswami during a weekend DataDive to organize, map, and query the dataset of 5000 raw text files.  The task was large: in three decades, Amnesty International has accumulated almost 1.4 million lines and 11,000 data files.  They volunteers dove in, manually identifying the "critical" Urgent Actions that had ultimately escalated, then used data mining techniques to uncover patterns that might predict others.

Based on the data trends uncovered, the volunteers were able to develop a preliminary predictive model for Amnesty International to identify high risk situations. The model allows users at the human rights organization to search for cases resulting in deaths by execution, and identify words or terms in the Urgent Action calls most often associated with executions — such as “assault,” “attempt,” “clemency,” “fear” and “appeal.” Using the linguistic algorithm, the model accurately predicts which incidents escalated to crisis point.

Taking a holistic approach to the challenge, the team went above and beyond to provide recommendations on infrastructure and design changes Amnesty International could make to improve the Urgent Action alert process itself.

To drive action and instill a stronger sense of community among the Network's members, the team suggested improvements to the format of the emails and webpage and added features like a map showing real-time data of actions around the world and a dashboard of engagement stats to illustrate the Network's collective impact.  The team then provided recommendations on capturing and storing data going forward, using an intake form and a relational database to reduce time spent cleaning data and ensure easy access to the most up to date information.

And they did it all in one marathon weekend.

With more research and development, this predictive model could be deployed throughout Amnesty International. The ability to prioritize potential threats and see real-time data on incoming alerts and outcomes will continue to allow Amnesty International to better coordinate their efforts and do what they do best – save more lives.