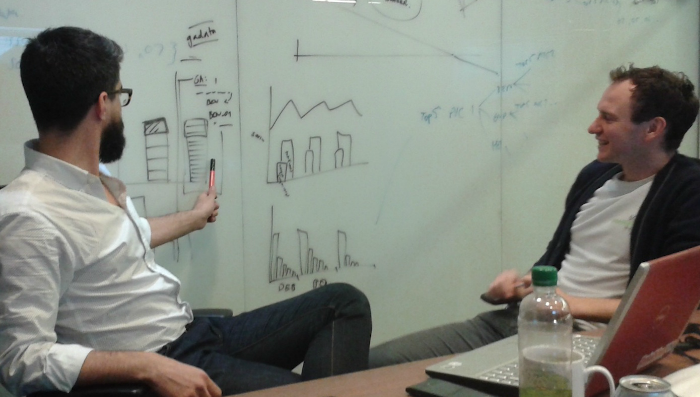 On an average day, 5,000 people walk into Citizens Advice’s 3,000 bureaux in communities throughout England and Wales seeking advice. Through its network of local community bureaux, digital advice services and national phone lines, UK charity Citizens Advice sees first-hand the issues that people are worrying about - debt, welfare, housing, employment, relationships, justice, discrimination and many others. The organization’s mission is to provide the advice people need for the problems they face and improve the policies and practices that affect people's lives.

The data Citizens Advice collects on these issues is rich and complex, but comes in a variety of formats that can’t be easily used together or linked meaningfully, making it difficult to see trends across their services, understand connections between what people are asking for or anticipate future needs.

Over the course of nine months, DataKind UK ran two DataDive weekends to dig into and explore Citizens Advice’s data, followed by a longer-term DataCorps project to develop a prototype dashboard which would build on and finalize the work produced at the DataDives.

Over 50 data science volunteers contributed to the project, but a special thanks goes to the core team of Data Ambassadors that led their volunteer teams: Peter Passaro, Iago Martinez, Arturo Sanchez Correa, Billy Wong, Henry Simms and Sam Leach.

After pulling together and linking all the data in Easticsearch (an open source search engine) the ace team of Data Ambassadors developed a prototype of an interactive dashboard that would enable the charity’s staff to use its data for ongoing decision making - exploring hunches, testing ideas and spotting new trends. 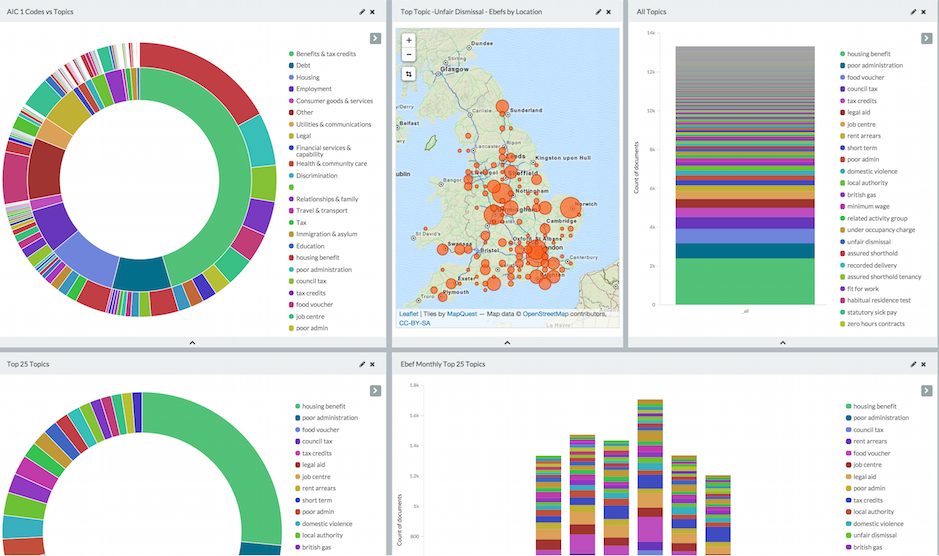 After four months’ work, DataKind UK volunteers completed the dashboard prototype, bringing together all three of their data sets in a searchable interface for the first time. One of the most valuable aspects was the section analyzing the free text data in the staff reporting records. Using text analysis, the DataCorps team identified a set of 300 highly significant topics that can be explored using any combination of time, frequency, location, demographic fields and issue codes. This meant users could very quickly drill down to the information they were looking for and see what new topics were popping up in the data to identify growing trends. The prototype dashboard immediately highlighted some surprising finds, such as the larger than anticipated problem of fuel and utilities issues among many consumers.

The team also created a visualisation showing the connections between repeat requests for advice. At least 30% of people going to the bureaux are repeat visitors, seeking advice with one problem then returning months later with a different problem. To help Citizens Advice better understand the relationships between these problems, and therefore offer preventive advice, the team used D3 to show how likely it was that someone asking about one issue would come back and ask about a second issue.

The longer term impact on the organization has been significant. The Citizens Advice staff credit this project with starting a data revolution in the organization, including some key lessons learned. The DataKind UK volunteers introduced new analysis techniques and open source technologies. The volunteers showed the potential power in democratizing the data and giving all staff access to it. It also went beyond the organization's walls though as Citizens Advice also shared its data with other charities to help inform their efforts.

The Citizens Advice team was inspired by the project with DataKind UK, and has reported some organizational shifts as a result including a greater focus on embracing openness, democratizing access to data and empowering staff to pose questions and explore hunches based on their experience hearing directly from UK citizens.