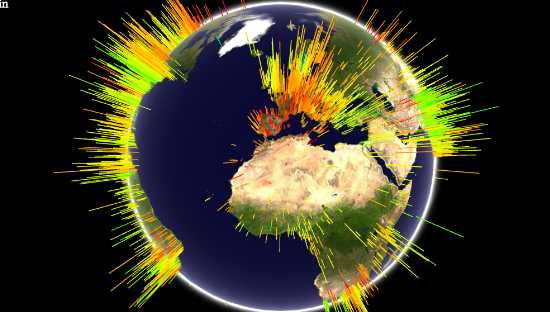 "But what if we don't have enough data?"

This is a concern we hear from social change organizations, but the truth is data is everywhere. It's pouring off laptops and cell phones. It's being crowd-sourced from the ground up, scraped off websites or being opened up for all to use.

With such abundance, what makes organizations feel like they don't have enough? Data is like oil - you have to refine it before it becomes useful so you can fuel your car or heat your home.

Ready for some examples? Here are our top 25 showcasing how DataKind volunteers, partner organizations and friends are using open and publicly available data or opening it up themselves to make the world better.  We'd love to hear yours! Sound off in the comments or on Twitter.

Chicago, U.S. - Using historical data they had collected about locations of fatal fires combined with public data from the city, a team of DataKind volunteers helped the American Red Cross identify key factors correlated to past fires and built a model and interactive map that helped the organization predict the likelihood a building will catch fire in the future.

Washington, DC, U.S. - A DataDive team used publicly available data and worked with the American Red Cross to prototype a model that predicts and maps which counties American Red Cross should target for its next smoke alarm installation campaigns to prevent home fire deaths and injuries.

U.S. - When DataKind DC and Enigma learned that they were each using open data to prevent home fire deaths and injuries, they joined forces to predict the fire risk block by block for over 170 cities across the United States.

Bangalore, India - Janaagraha's civic portal IChangeMyCity promotes promotes civic action at a neighborhood level by enabling citizens to report a complaint that then gets upvoted by the community and flagged for government officials to take action. A DataDive team helped reduce duplications and understand what was preventing open issues from being closed out to ensure this crowd-sourced data was indeed spurring action.

San Francisco, U.S. - A DataDive team helped SFHIP use publicly available GIS files and datasets, including demographic information, locations of key institutions like schools, and crime data to create an automated interactive data visualization tool that San Francisco residents can use to glean insights into factors that impact public safety.

Leeds, UK - Another DataDive team again used open local data and reused the code from the DC Action for Children project to create a visualization tool for multiple charities that allows people to explore features of financial, young NEETs (Not in Education, Employment, or Training) and mental health inequality in the city.

Sharing Data for a Wider View

London, UK - At a DataKind UK DataDive, Citizens Advice Bureau opened and shared its relevant data with two other charities at the event, utilizing (newly) opened data to improve lives in the UK.

London, UK - At the same DataKind UK DataDive, a team helped St. Mungos Broadway explore the types of issues people went to Citizens Advice for help with before they ended up homeless in St Mungo’s Broadway’s system.

U.S. - Guidestar is a nonprofit that itself makes public data on nonprofit 990 tax forms in the U.S. easier to access for others to use. During this DataDive, they reached out to another organization, GreatNonprofits, to share their data to create a more robust model to help them predict and prevent nonprofits going into financial default.

Global - A DataDive team scraped data on the enforcement of the European Court of Human Rights judgements and began to link it with HURIDOCS current dataset of court decisions, giving human rights activists an easy way to ensure that judgements in key countries were indeed being implemented.

Global - A DataDive scraped commodity price data from the web to help The World Bank enable banks and governments worldwide to more accurately set monetary policies and best respond during times of crisis.

East Africa - Two DataCorps teams worked with GiveDirectly to explore how publicly available satellite imagery could be used to understand poverty levels of villages in Kenya and Uganda.

Global - A DataDive team combined poverty data from 2001 and 2005 and satellite images of illumination to help The World Bank see if there was a correlation between poverty levels around the world and the levels of illumination.

Global - A DataDive team analyzed thousands of tweets to identify key influencers in Earth Hour's supporters to more effectively inspire people to take action in the fight against global warming.