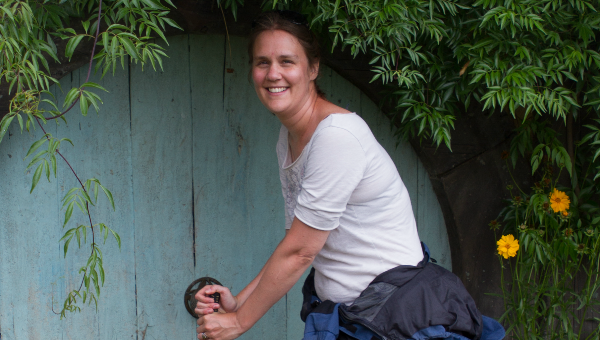 Meet Erin, Our In-House Data Scientist
March 06, 2015
At the Clinton Global Initiative last September, DataKind announced its committment to launch an in-house data science team for good. The In-House Team is DataKind’s newest program that will take on larger humanitarian challenges than can be addressed by our other programs.
We're thrilled to introduce its first team member - Erin Akred, DataKind's first In-House Data Scientist. Learn more about Erin and the In-House Team below and stay tuned for more updates to come on this exciting new initiative!

What were you up to before you came to DataKind?

Prior to DataKind, I lead a team whose mission was to educate American voters about the candidates on their ballots.  Recognizing that many don't vote because the time commitment of learning who the candidates say they are and extrapolating that to how they'll legislate, a visualization tool was developed based on machine learning and Open Data from the Federal Election Commission and the Library of Congress (for incumbents), to accurately portray how a candidate would act in office based primarily on their campaign donations and contributions.

How did you hear about DataKind?

Before my foray into the voting world, I was a Presidential Innovation Fellow working with the White House and Department of Agriculture on Open Data initiatives.  I quickly realized that one of the best ways to get people on board with Open Data was to show them how it was being used.  It was in sourcing these examples that I first found out about DataKind and I've been enamored since!

Tell us about your role - what will you be working on?

I will be focused on something new for the organization (fitting after spending 5 years in a corporate R&D consulting lab).  I will be helping scope out an inaugural in-house, collective impact project.  The yet-to-be-named program will be similar to DataCorps in that data scientists will be applying their skills toward a humanitarian end, but different in the engagement model (multiple stakeholders), time invested (approximately a year) and hopefully scale of impact!

What is one of the most surprising things you’ve learned or seen in working with data?

A friend of mine recently quantified the phenomena of gerrymandering and its implications for partisan politics.  Contrary to what Jon Stewart was saying on the Daily Show, gerrymandering wasn't necessarily leading to more partisan candidates or causing government to shut down, but was putting the state delegation at odds with the electorate, as seen in North Carolina in 2012.

What is one of the most surprising things you’ve learned or seen in working with data?

What advice do you have for someone just getting started with data science?

Do it! The opportunities to apply those skills toward a humanitarian end are popping up everywhere!

What blogs or articles do you love reading to stay up to date on all the data news?

Flowing Data is great.  O'Reilly books are great. But best of all is my data scientist husband who can't contain his excitement about the field.

When you’re not busy using data science to change the world, what do you like to do in your free time?

Spend time at dog-friendly venues with my dog-friendly friends.  Listen to NPR.  Play strategy games.  Take advantage of the year-long growing season in California! Finally, and the source of the photo above...hunt hobbits!
Read more posts
April 12, 2021
Powering Public Data for Communities: Highlights from Virtual DataDive®️ Report Back
We recently hosted our DataDive Report Back, keeping with the theme of Trust, Transparency, Togetherness: Powering Public Data for Communities, and we’re honored and humbled by the level of excitement...
Read full story
November 07, 2019
Applying AI to Societal Challenges in Cities & Communities: Highlights from DataKind’s Virtual DataDive With Microsoft
We can’t believe it’s been a month since our first-ever virtual DataDive. We’re still feeling the energy and enthusiasm from that day. More than 100 DataKind volunteers from around the world, hailing from...
Read full story
June 20, 2018
Using Satellite Imagery to Generate Awareness and Funds for Refugees
At a 2017 DataDive presented by USA for UNHCR, #GivingTuesday and the Bill & Melinda Gates Foundation, a team of DataKind volunteers led by Evelyn Lang, Ravin Pierre, and Friederike Schüür worked alongside...
Read full story
Blog Archive
Cookies anyone?