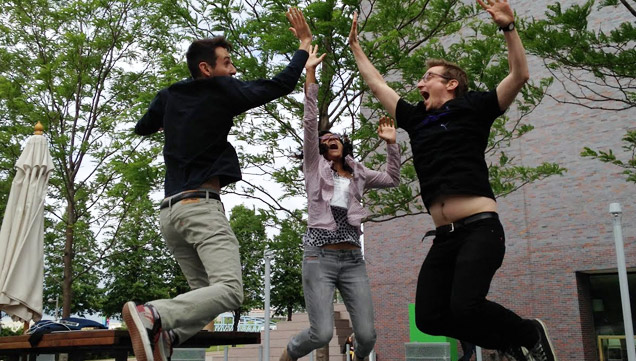 Dispatch From the Frontlines of Data: DataKind goes to Eyeo
July 02, 2014

The above three DataKinders recently attended the Eyeo Festival last month.  As the image indicates, it was awesome.

For the uninitiated, Eyeo is a four-day celebration of art, technology, data, and design held each June at the Walker Art Center in beautiful (and vegetarian friendly, among other good things) Minneapolis, Minnesota.  It draws a diverse and multidisciplinary group of artists, technologists, and researchers for three days of talks on the bleeding edge of creative technology.  This year was no exception.  Nestled between a giant spoon and Hopper paintings, attendees took in sessions on NASA’s use of the Oculus Rift for Martian exploration, personal counter-surveillance, mutatus, creative coding in assembly and more, all presented by a distinguished list of speakers.

Unfortunately (for me in writing this, not attendees), this diversity means Eyeo resists concise summarization.  There were just too many varied and interesting sessions to distill out a set of best or most representative talks.  (Browse the program and check out the documentation to see what I mean.)  There were, however, some cross-cutting themes that touched on topics close to DataKind.

The first was data visualization.  As a premier conference on data and design, the fact that vis was common is not surprising.  What was surprising was how it was presented: with the kind of novelty, insight, and spectacularity that can only come from top practitioners.  Mike Bostock’s talk on visualizing algorithms, for example, expanded my thinking on what could and should be visualized.  By transforming recondite blocks of text into visual representations of problem-solving procedures, he showed how programmers could better understand, debug, and reason about these oft-used but infrequently fully-understood tools.  (This is especially important when subtle changes or features can have significant implication that would otherwise go unrecognized.)  Scott Davidoff and Jesse Kris of NASA JPL showed how visualization could be used to change how scientists do science.  By using the Oculus Rift VR device to create an environment much more akin to what a true field-researcher would work in, they were able to produce drastic improvements in scientists’ abilities to extract information about the martian surface from rover data.  Both reminded me that visualization is a way to transform problems from a form that’s difficult to process to one that’s better suited to our cognitive strengths.  This - not making pretty pictures - is the purpose and power of visualization.

The next recurrent theme was data ethics and the use of art and technology to address issues surrounding ‘big data.’  Artist Adam Harvey shared his efforts to counter pervasive video surveillance by creating fashion and technology that confuses or interferes with facial-recognition systems.  Burak Arikan, technologist and activist, outlined his work on using data to check powerful actors by creating tools that expose the structure of their relationships.  And Researcher Kate Crawford argued for the existence of a new desire to reduce individuality and minimize conspicuousness as a result of ubiquitous surveillance.  The reactions, however, weren’t all contra.  Kim Rees, Principal at Periscopic and self-professed ‘data-optimist’, argued in favor of ubiquitous personal data collection and reminded us that we want to maximize the upside from data while minimizing the downside risk.  This resonated for me, as DataKind believes in the power of data for good.  Big data's ability to allow governments to predict our movements also allows us to predict the onset of famine.  At DataKind, we strive to make sure that reactions against the former don’t end up inadvertently limiting the latter.

The last theme was more felt than discussed: community.  Eyeo brought together people from diverse backgrounds and experiences - artists, engineers, designers, researchers - to share creative uses of technology.  Eyeo pulled this off spectacularly, fostering an environment that celebrated questioning, curiosity, skill building, openness, and inclusion.  And more than nice, these features were necessary for the conference.  If it were siloed, judgmental, or pretentious, people coming from a primarily technical or primarily arts background might be hesitant to share their experiences with one another.  Collaboration would break down and creative cross pollination wouldn't occur.  Replace “creatives” with “mission-driven organizations” and you have DataKind's circumstances exactly since we strive to bring together leading social sector and data science experts.  It reinforced to us the importance of inclusion, communication, openness and cooperation in our work - a great example we hope to emulate.

All in all, Eyeo was a distinctly memorable experience that was simultaneously engaging, rigorous, and celebratory all at once.  Not only were we exposed to new ways of thinking about a diverse array of topics, we saw possibilities for our work and community that would have been hard to find elsewhere.  For those with any interest in the topics discussed above, I can only say get a ticket to Eyeo 2015.