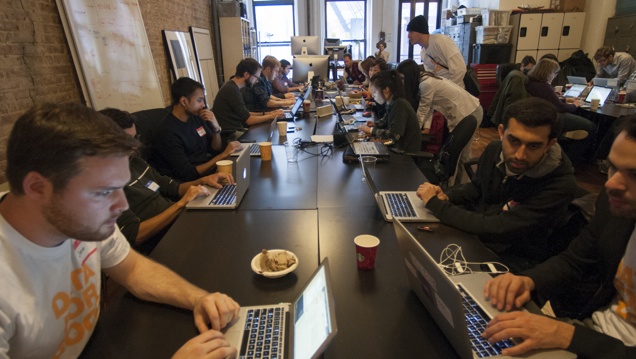 Last weekend, more than 150 data scientists, developers, and designers showed up to put their skills to use for the greater good at our DataDive in NYC.  Volunteers dove into datasets alongside representatives from Amnesty International, Crisis Text Line, the Mayor's Office of Data Analytics and the UN MyWorld Survey team to help them make better use of their data. If you didn't follow along in real time on hackpad, here's a quick rundown of all the action.

The Amnesty International team, led by Data Ambassadors Victor Hu and Adam Laiacano and Amnesty representatives Samir Goswami and Anu Ghate, dove into thirty years of Urgent Action Alerts-- the calls to action that spur Amnesty International activists to send messages on behalf of political prisoners, refugees and victims of human rights abuse. They faced tough decisions about how to recognize the humanity and sensitivity of their data.  After one half of the team split to work on models to predict risk for each alert, the other half ended up going analog for awhile: 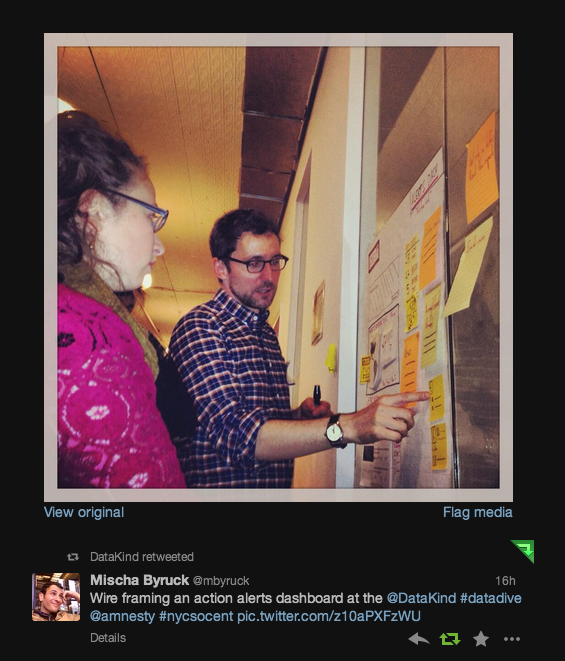 And emerged with a dashboard to visualize Urgent Action Alerts in real time.  The team also visualized alert hotspots across the globe over time, built an entire backend data flow to reduce future human error, and completely redesigned the way Urgent Action Alerts are presented. All in 48 hours. It was an amazing effort by a truly remarkable team.

Crisis Text Line is a new non-profit dedicated to helping teens in crisis through text message counseling. The team, led by Data Ambassadors Cathy O'Neil and Arun Ahuja and CTL representative (and fellow data scientist) Bob Filbin, spent the day exploring questions such as whether the length of a conversation was related to the outcome of a session or how different concerns varied by state.  After diving into data cleaning, exploratory data analysis, and some preliminary model building, the team had a surprise visit from a special guest: 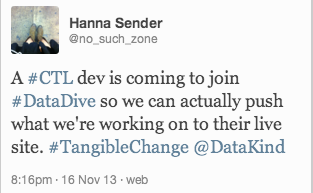 They deserve a huge round of applause for working with such sensitive data. We can't share the results of what they did just yet, but can share our gratitude. After we shut down at 10 pm on Saturday, some of the CTL team continued working at the McDonald's around the corner, so that they could deliver meaningful results to help CTL's counselors make a difference in the lives of teens in crisis.  There are few sacrifices greater than having to work in a McDonald's on a Saturday night.  That's commitment.

The Mayor's Office of Data Analytics team knew they had a real challenge before them-- they needed to find a way to resolve addresses across New York City databases so that MODA could use geocoded data to make real change. And anyone who has stood at the corner of 30th and 30th in Queens knows just how hard parsing address data can be! 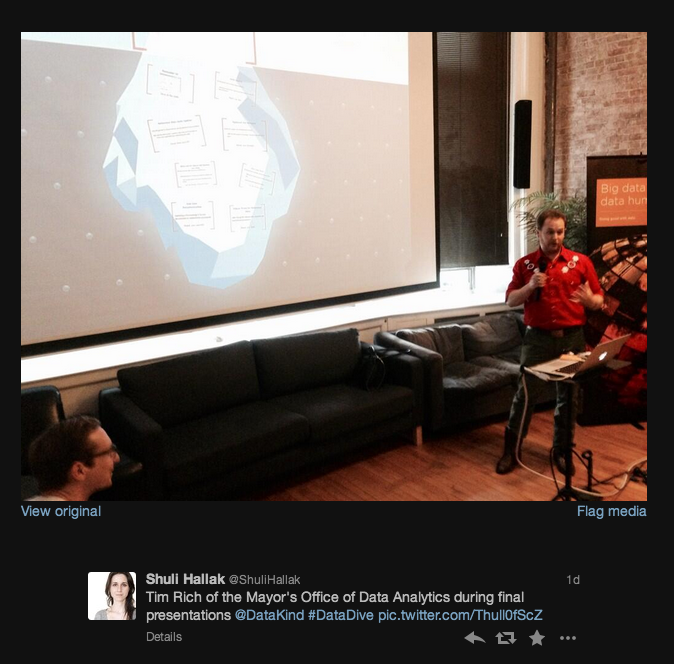 But data ambassadors Vlad Dubovskiy and Tim Rich fearlessly led the way. Along with Sohaib Hasan and Aida Shoydokova from MODA, the team fixed bugs, wrote a parser, and created a brand new GUI interface so that any city employee can now use the geocoder to get usable address data.

The UN MyWorld Survey team not only dove headfirst into a huge data set, they approached their problem with grace and aplomb: 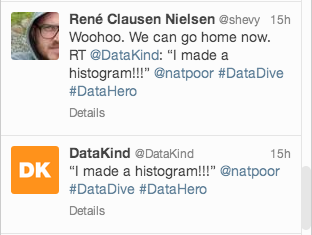 Led by Brian d'Alessandro, with help from René Nielsen, Claire Melamed, and Laura Rodriguez Takeuchi, they began to see how living in a country with poor governance affects which priorities people pick. And that will help the UN recommend better policies.

If you want to see more of what these incredible teams accomplished check out their work on hackpad.  If you couldn't make the event but still want to use your data skills for good, fear not!  We regularly hold Meetups in NYC and have open office hours for groups who want to drop in to DKHQ and learn about data for good.

We'll just wrap up our recap with one more round of applause. Way to go data divers!  And thanks to all our volunteers and amazing sponsors who made this weekend possible: Teradata, Knight Foundation, and New Work City.  See you at the next one! 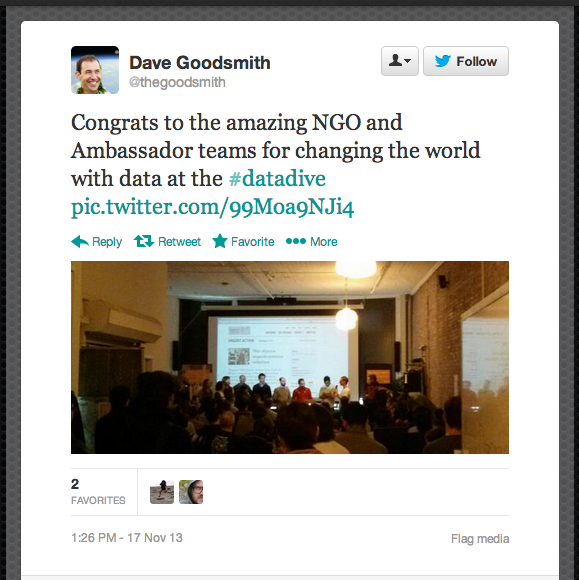